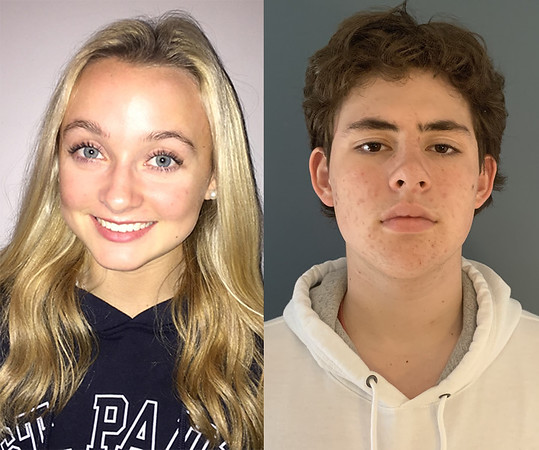 Basketball players with high hopes for their teams competing in the state tournament are the â€śAthlete of the Weekâ€ť picks for area scholastic sports. They are senior Kailyn Bielecki of No. 2-ranked St. Paul (19-2), which hosts No. 7 seeded and visiting Wethersfield (18-5) in the quarterfinals of Class L play on Thursday, and junior Sean Wininger of No. 4-ranked Bristol Central (16-4), which faces visiting No. 29 Bunnell (8-13) in Div. II action this evening.

Bielecki, the daughter of Mark and Nicole Bielecki of New Britain, is the fourth member of Joe Moneâ€™s charges to be selected for these honors this season, joining Janessa Gonzalez, Jade Udoh and Olivia Heslin. Mone comments on his defensive stalwart.

â€śWe pride ourselves in being a good defensive team and it all starts with Kailyn,â€ť Mone said. â€śShe draws the best ball handlers. How hard she works is what fuels the rest of the team to play just as hard. Sheâ€™s improved her all-around game as well and has stepped up offensively in some big games this year. She has played phenomenal this year.â€ť

Last year, the Falcons reached the semifinals of state play.

â€śThis year, especially, the team aspect has been very strong,â€ť Bielecki said. â€śAll the girls are very close to each other and that relationship is reflected on the court. I would consider myself definitely a defensive specialist. My game is mostly focused on the defensive effort.

â€śOur goal is to win the championship, thatâ€™s the main goal and has been since the beginning of the season, especially the seniors. We want to just make the most out of our last year.â€ť

Although she will run in college, she enjoys all three sports she has competed in at St. Paul, cross country, basketball and outdoor track.

â€śI played basketball before I started running,â€ť Bielecki said. â€śMy parents introduced me to the idea of doing it. It was my decision, it was nothing they made me do. I love them both equally. Both sports are close to me.â€ť

As far as plans go for next year, BieleckiÂ  will be studying physical therapy while taking part in cross country and track at Springfield College.

Wininger and his teammates also have a shot at a state crown. If not this year, next year. Wininger is the teamâ€™s second-leading scorer next to sophomore Donovan Clingan, one of the best or the best in the state this year, depending on who one talks to.

The Clingan-Wininger punch is solid, and they have played as teammates for years. Bristol Central coach Tim Barrette is pleased with Wininger getting the â€śAOWâ€ť nod, after being placed on the CCC South Divisionâ€™s all-conference team.

â€śHe has had a great season, averaging eight points and eight rebounds per game,â€ť Barrette said. â€śHe has been a leader since the summertime. He works hard in the weight room, works out before school, and puts in extra time getting shots off in the gym. He loves the game and the leaps and strides he has made since last year have been one of the reasons we have gone 16-4 this season.Â Â

â€śHe has done a great job on the backboards this year. He works hard to get position and has been securing the ball when it is in his area. He had his best game of the season versus Eastern on a huge stage. He had 17 points that night while connecting on three three-point field goals. His ability to play both inside and outside makes him a great compliment to Donovan inside.â€ť

Asked about receiving the all-conference honors, Wininger, the son of Peter and Erin Wininger, was pleased, and partially because he joins Clingan.

â€śI was proud, because it was a moment that Iâ€™ve been working for since I was a sophomore,â€ť Wininger said. â€śI was happy I was nominated and was surprised, I didnâ€™t know. He (Clingan) and I have been playing together for years. Heâ€™s someone I grew up with and I enjoy playing on the same team as him.â€ť

Heâ€™s also proud of the Bristol Central team as a whole.

â€śWe knew we were capable, the question was would we execute well (this year),â€ť Wininger said. â€śI couldnâ€™t be more proud of the team and the work they put in this year.â€ť

Also from a sports-minded family, his father played basketball for St. Paul in Bristol before going on to do the same at Western New England College. His mother swam for Newington High, and he has a younger brother, Patrick, who runs cross country and track at Chippens Hill Middle School. Besides basketball, the AOW pick pitches for the Bristol Centralâ€™s baseball program.