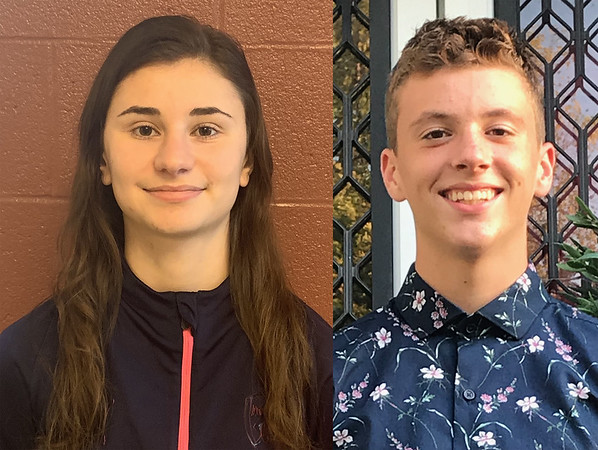 Two basketball players who provide the tempo for their teams, as well as lead them in scoring, are the Athlete of the Week picks for area high school sports. They are senior Ami Roqi of Terryville High and junior Elijah Parent of Bristol Eastern.

This is the second time in two seasons that Roqi, the daughter of Vjollca and Eduart Roqi, has received the honor in basketball.

A week ago, Roqi and teammate Taylor Bennett had eight points each to lead the Kangaroos in a loss. On Friday, Roqi recorded a team-high 14 in a loss to host Northwestern.

“Amy is our captain and leader of a very young team,” Terryville coach Tom Morgan said. “She brings the ball upcourt, calls the plays, shoots from the outside and this year has added drives to the basket in her repertoire. She is small, but uses her quickness to get around the defense and penetrate. She also is a very good passer, and when her teammates get open she will get them the ball.

“She is a very gutsy player. As proof of that, I have coached for 38 years, at three different schools, and never had a player who is as adept at stepping in and taking the charge as she is. When someone drives on her they take a great risk of committing an offensive foul. Amy is quiet, not a yeller, but the other kids look up to her, and co-coach Bree Redman and I rely on her completely to be our line of communication to the rest of the team.”

Roqi took up basketball at a very early age, “as soon as I could walk,” she said. This was on her own before later playing at Eli Middle School. Then she went to high school, where she is now in her fourth and final season. Last year, she earned honorable mention All-Berkshire League recognition.

As far as soccer, her favorite sport, she was a tri-captain for the school this past fall, earning second team league honors as a midfielder. The sport runs in her family with her brother, Fitor, having played for Terryville and her father playing when he was in Albania.

Her plans for next year include college and studying physical therapy while playing either club or intramural soccer. She has been accepted at Quinnipiac University and that is the school she may choose. There are other schools that are possibilities.

Parent is the son of Bevin and D.J. Parent. In his past three games, he scored a team-high 22, game-high 24 and team-high 14 points in games against Maloney, Avon and Bristol Central, in that order.

His coach, Bunty Ray, said that Parent, who missed the first game of the season because of an injury, scores 18 points a game, hit a 3-pointer for the victory against Avon, and has scored 20 or more points this season in five of his nine games played.

“Elijah is a steady player that has worked extremely hard all year while trying to come back from a knee injury that caused him to miss the whole preseason and also the first game,” Ray said. “Teams pay special attention to him and make him have to work for every point and he has still managed to score for a great average and shoot nearly 50 percent.

“I have been fortunate to see him grow up since he was little and being a coach’s kid see how much time and work he has put into  his game. More importantly, he is a great person off the court which allows him to excel.”

With the loss, the Rams entered this week with a 5-5 record, compared to a 5-15 finish last season.

“We have better team chemistry this year,” Parent said. “We hope to do better this year and we work really hard. We’re in every single game, although sometimes we don’t always win. I think we’ll get better and in more games.”

Parent began playing basketball as a four-year-old at the Plainville YMCA. His parents put a ball in his hands and  “I took it.” His father was coaching at “The Y,” and the son went to the practices with and learned from him there.

“I love the energy, the intensity and I just love to play,” Parent said. “I love to compete. It’s my favorite sport of the two. I like to be the floor general and help my teammates in any way that I can.”