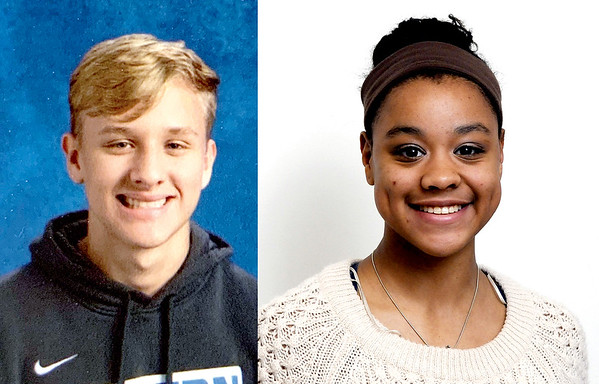 With the local high school fall sports schedule completed, it’s time to catch up in showcasing some of the best that played without yet having received “Athlete of the Week” honors.

Pina, the daughter of Doug Pina and Adrienne Bentley, was the shining star when the three Bristol high schools competed against one another Oct. 12 at the Dennis Malone Aquatic Center for the city crown. The Rams came away the winners with a 53-39 score over Bristol Eastern and 70-22 over St. Paul.

Pina’s contribution was a comfortable first place finish in the 100 butterfly (1:07.55) and being on the winning 200 medley and 400 freestyle relay teams with Camille Attle, Nyomi Codero and Kathelyn Holleran.

Pina was pleased overall with her team’s performance.

“I was shocked, but also not as surprised as I could have been,” Pina said at the time. “I’m really proud of the girls we have. I think we made big moves today.”

Looking back last week, it was a positive memory.

“It was high intensity,” Pina said. “It was more of a mind game than swimming. We were worried that Eastern would be getting in the younger swimmers’ heads, but we pulled through and I’m excited about it.”

The Rams posted a 3-6 mark for the regular season.

“I’m sad it’s over and am looking forward to see how the team does next year,” Pina said. “I’m proud of what we accomplished in the season.”

In getting into the pool, Pina followed in her older sister Sidney’s footsteps. Sidney did gymnastics, so Mackenzie Pina did, too. When Sidney went into swimming for a change, Mackenzie was six or seven years old and followed her in that arena, too.

“I had faith that whatever I did, I would be good at it,” Pina said. “I’m happy with how things turned out. I like competing. I’m not a big fan of practice, but I like the atmosphere at swim meets. But I know it’s necessary.”

Pina was also recognized with “AOW” honors as a sophomore after she recorded another four-victory meet in October of 2017.

Pina is from an athletic-minded family. Her mother coaches girls swimming at Bristol Central. Her father, Doug, a former head football coach at the high school, played the sport in college for Syracuse University. A sister, Courtney, swam for Bristol Central and another, Jaleesa, had done gymnastics.

Her plan for the 2020-2021 school year is to study forensic anthropology in college. She’s not planning to swim at that next level.

Mosback, the son of Karen and Robert Mosback, was presented with Bristol Eastern’s “Defensive Player of the Game” plaque following the Thanksgiving Day football game at Muzzy Field, a close 34-32 win for Bristol Central.

He talked about Eastern (2-8) losing that game, what was one of the most exciting in the 61-year series.

“It was a heartbreak. It was a very close game that could have gone either way,” Mosback said. “We were confident going into the game, but we made mistakes. Sometimes in football it comes down to the last minute and that’s what happened to us. To score in a minute is very hard to do.”

With a number of fine performances during the season, another that stands out is his tackle, the final one of the game, when the Laners ended a 17-game losing streak in a 14-0 win over Pomperaug.

In getting to where he is today as a solid linebacker, Mosback is following in his father’s footsteps. Robert Mosback had played for Bristol Eastern and in college.

“I started in the third grade with the Bulldogs,” Mosback said. “I grew up watching football on TV and always wanted to be a player. I also play baseball, but football is my favorite sport.”

As far as baseball goes at school, it’s been at the JV level. He’s an outfielder and hopes to move up to the varsity one day. He says that playing both sports has been good for him.

“I think sports has definitely made me a better man,” Mosback said. “I’ve been playing sports since I was young and it has helped me grow. Battling adversity, especially, is very big.”

As far as long term goals go, he hopes to become a physical therapist.