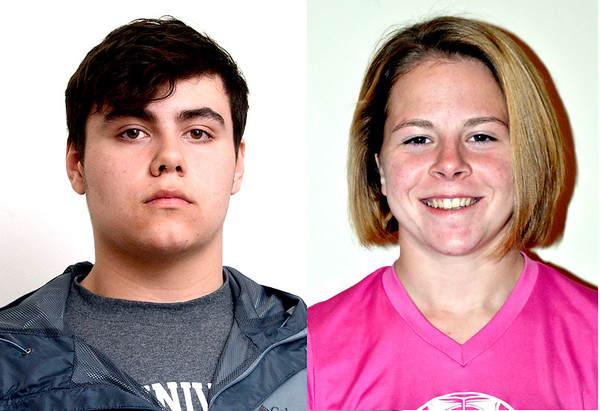 This may be the first time that both Bristol Press â€śAthlete of the Weekâ€ť selections for the same week are junior captains in their sport, with St. Paul girls soccer goalkeeper Nina Zolwinski and linebacker/right guard Jakob Salinas of the Bristol Central football team being honored.

Zolwinski, a two-time All-State keeper for coach Jim Husbands, is the daughter of Jadz and Robert Zolwinski of Bristol. She returned this year after a season-ending injury as a sophomore.

â€śI am extremely happy and proud of the all-conference and All-State recognitions she received this year,â€ť Husbands said. â€śIt is well deserved. Ninaâ€™s solid play in goal was one of the main reasons we were able to qualify for the state tournament after missing out last year. Her on-field experience and leadership was key to the teamâ€™s improvement.

â€śShe kept us in several games with her play and has earned the respect of her coaches and teammates, but also the respect of every coach in the NVL. With Nina in goal, there was always a feeling of confidence among her teammates that every game we played was winnable and thatâ€™s important for a team, knowing you can win regardless of the opponent.â€ť

One of Zolwinskiâ€™s goals for the team in 2020 is to take the NVL tournament title, as they did her freshman year. Another is to also make noise in the state tournament, which they also did in 2017.

â€śOur team goal next year is to work hard and, hopefully, go far with that,â€ť Zolwinski said. â€śWe won the NVLs two years ago and went to the semifinals in Class S. We want to get there, thatâ€™s the goal.â€ť

Zolwinski took up the sport at the age of nine and has not looked back. She appreciates what Husbands brings to the table for the Falcons.

â€śI think heâ€™s a real good coach and he helps us,â€ť Zolwinski said. â€śHeâ€™s very supportive of the team even through our losses. He helps the younger players with their positions.â€ť

Itâ€™s also a Zolwinski family sport. Her brother, Stefan, played for St. Paul last year as a captain and is now competing in club ball in college. Her long term goal is to play varsity at that level while studying psychology.

Salinas, the son of Jorge Salinas and Kim Sadecki, also wrestles and competes in outdoor track for the Rams as a three sport standout. He gets his â€śAOWâ€ť nod after earning Centralâ€™s â€śDefensive Player of the Gameâ€ť plaque for his exploits in Thursdayâ€™s Thanksgiving Day Game at Muzzy Field against cross-town rival Bristol Eastern, a 34-32 win for the Rams.

â€śJake has started at inside linebacker for us since game one of his freshman year,â€ť Rams coach Jeff Papazian said. â€śAnd that says a lot because of the league we play in and the quality teams we see every week. He was All-CCC as a freshman and sophomore, and a captain for us this past season as a junior. Heâ€™s the guy for us now that all others gravitate to.â€ť

â€śThe game overall was emotional on both sides,â€ť Salinas said. â€śIt was an exciting game throughout all four quarters. And, the rivalry had a big impact on it. I respect Eastern on their game plan, but I believe penalties and other mental breakdowns caused the game to be a lot closer.â€ť

In becoming the force he is today on the gridiron, Salinas began his career playing with the Bristol Bulldogs at a young age. His father got him to play and heâ€™s glad, because itâ€™s given him something positive to do.

â€śTo be honest, otherwise I donâ€™t know what else Iâ€™d do,â€ť Salinas said. â€śI liked smacking kids and now that Iâ€™m older Iâ€™m understanding the game more. Iâ€™m looking at it from different angles. Iâ€™m gaining relationships through the game, whether itâ€™s opponents or teammates.â€ť

With the Rams having completed a 5-5 season this fall, Salinas is hoping that he and his teammates can get to the state playoffs in 2020. He added that the players would be working hard on the off-season and he appreciates what the coaching staff does for them.

â€śThey look out for us all day, whether itâ€™s in classes, in practice or on the field in games,â€ť Salinas said. â€śTheyâ€™re always there to speak to if needed. Theyâ€™ve become more than coaches. We see them at JV games and with their families and get to know them in general.â€ť

As far as his future goes, heâ€™s had an offer from the Navy.Â  Heâ€™s also hoping to get other feelers in getting him to the next level of play.