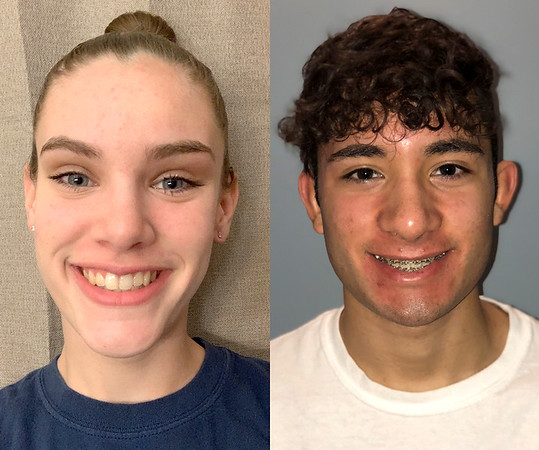 The winter high school season for Bristol area sports has ended, but there are still those who deserve “Athlete of the Week” recognition for their performances. Two of these individuals are Paige McLaughlin, a senior captain of the Bristol Eastern girls basketball team, and junior Jose Ramirez, the Class L 600-meters champion for the Bristol Central boys indoor track team.

McLaughlin, who is ranked fifth academically in her class, is the daughter of Kelli and Sean McLaughlin. She and her teammates went 15-9 overall on the season and were ranked No. 9 in Class L tournament play, where they lost to No. 1 Notre-Dame Fairfield, 55-48, in the quarterfinals on Mar. 4. McLaughlin netted five points and took down seven rebounds in her finale high school basketball game.

“She’s been a great leader and role model,” Lancers head coach Tony Floyd said. “It’s not all about her, but making sure other kids are on task. She’s a great communicator and is a great leader both on and off the court for her teammates. When a player or the team is down, she builds them up with her great attitude. We’ll miss that leadership. Hopefully, someone will step up and fill that role next year.

“She will definitely be successful in life. She sets goals and achieves them, long and short term goals. She’s a point guard who improved her shot and defense in growing fast from 5-3 to being a wing player this year. She’s going to be honored by the CIAC as a Scholar/Athlete.”

The Lancers went 7-14 overall during their 2017-2018 campaign and pretty-much started out in that same manner this past season in losing three of its initial four games before turning things around.

“I think we were a little hesitant at the beginning of the season,” McLaughlin said. “As the season went along our chemistry improved and things fell into place. I think everyone knowing what their role was on the team got us to where we went in the [state] tournament. I’m satisfied with our season.”

McLaughlin also credits her coach for the successful season.

“As tough as practices may be at times and as hard as Floyd can get on us, he always sees our full potential and works to get us there,” McLaughlin said.

Her plans for next year are to study in college to become a pharmacist.

Ramirez, the son of Efrian and Marcia Ramirez, finished his season placing seventh in the 600-meters at the New Englands at the Reggie Lewis Center in Boston. He also took first in the event in the Class L championships a time of 1:24.76 and fourth at the State Open in 1:24.13, held on Feb. 8 and 17, respectively, at the Floyd Little Athletic Center.

“But the game plan was to win, obviously, and I just went after it,” Ramirez said of winning the Class L title as the No. 2 seed. “It felt amazing, I don’t know how to explain it. It felt like my hard work paid off.”

This set him up for the State Open.

“I was seeded fourth going in,” Ramirez said. “I wanted to [set a personal record] and I did. I might not have hit my expectations, like a 1:22.00, but I still gave it my all, which brought me to the New Englands and that was awesome.”

Again, all of this despite taking up running for the first time as a freshman.

“I just like to run,” Ramirez said. “My first year of sports was my freshman year with cross country. I probably got third on my team in the City Meet. We did really well this year. We got second in Class L and got a banner. We hadn’t done that since 2010 [when the program was state champions].”

In sharing advice with the younger athletes, Ramirez is to make sure you always enjoy the sport you are playing.

“To not only work hard, but to know why you are doing it, have a passion for it, and know your limits,” Ramirez said.

His plans after high school include running in college. He’s unsure of what his studies will encompass, but he’s currently looking at something in either the health or math field. In the meantime, it’s practicing for the spring track season and later his senior season of running starting in the fall.