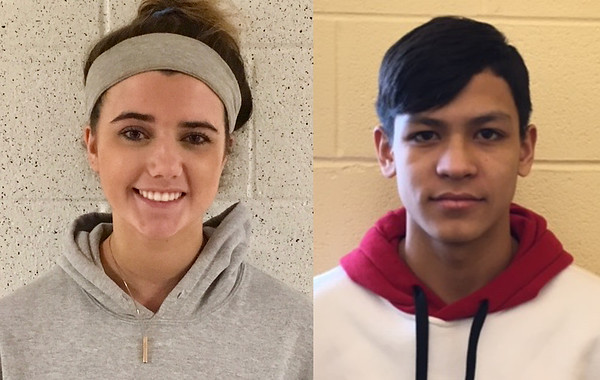 The ‚ÄúAthlete of the Week‚Äù (AOW) picks are basketball players, one from a No. 3 ranked team with having had the goal of going all of the way in the state tournament with its 19-game winning streak and the other from a young team that barely qualified in surprising many with its strong late regular season and postseason play.

Also interesting is the that fact these two players, senior Morgan Kolb of St. Paul and freshman Dominick Dao of Terryville High, respectively, are both of their team‚Äôs sixth man in coming off the bench, the first time this has occurred since The Bristol Press has been recognizing athletes for this weekly honor. ¬Ý

The choice of Kolb, her second year earning the recognition, comes on her combined defense and offensive play for coach Joe Mone‚Äôs charges during this season. The daughter of Kim and Michael Kolb of Southington, she came off the bench in the first Class S state tournament game, a 84-50 win over visiting No. 11 Bloomfield a week ago today, in contributing 13 points while one of only six St. Paul players to get on the court in a 56-45 eliminating semifinal round loss to No. 7 Trinity Catholic in Newtown on Friday.

It was a disappointing loss for the Falcons, but Mone said his players had a great year and pointed out the work of Kolb.

‚ÄúMorgan was a huge asset off the bench for us this season,‚Äù Mone said. ‚ÄúShe was injured early in the beginning and it took awhile for her to get back to herself and when she did it made us a much better team. She was huge in the NVL and state tourney offensively and defensively. She was a big reason we captured the NVL championship. It was a pleasure coaching her and we‚Äôll definitely miss her next year.‚Äù

It‚Äôs the end of her school sports career because Kolb won‚Äôt be playing in college. However, it‚Äôs been a nice ride in high school. The Falcons have gone 42-8 in her two years at the school and this year‚Äôs team captured both the NVL‚Äôs regular season and tournament titles while 24-3 overall. Kolb, who transferred from Holy Cross in Waterbury after her sophomore year, comments on the Trinity Catholic loss.

‚ÄúI thought it was a tough loss,‚Äù Kolb said. ‚ÄúBut, I couldn‚Äôt be more proud of my team this season. I don‚Äôt know what to do now. I‚Äôll have to start preparing for college.‚Äù.

In addition to basketball, Kolb played for the school‚Äôs girls volleyball team in the fall, one that also fared well. She was an outside hitter for a team that made the state tournament for the first time in its 10 years of existence. Playing the two sports, she added, have benefitted her in preparing for her future.

‚ÄúAs an individual, sports taught me a lot about time management,‚Äù Kolb said. ‚ÄúSports has taught me that if you work hard you get the outcome you hope for and that gets you ready for college and other things in life.‚Äù

As far as the younger athletes go, Kolb leaves them with advice.

‚ÄúNever overthink and just play and have fun,‚Äù Kolb said. ‚ÄúAlso, never let sports get in the way of academic success, which is most important to your future.‚Äù

Her plans for the 2019-2010 school year are to attend La Salle University in Philadelphia, where she will study in its nursing program.

Terryville (9-13) carried a record of 4-11 after playing three-quarters of its 2018-2019 season then went on to claim four straight victories to qualify for the Division V boys state tournament. Terryville coach Mark Fowler said earlier that his team was playing with borrowed money and that all they needed to do was play their best to give it a run. And they did.

Ranked No. 22, they opened the tournament a week ago today with a 42-38 win over No. 11 Bullard Havens Tech (12-9) in Bridgeport.This was a pleasant surprise. The Kangaroos then went on to lose two days later in a nail-biter, 45-42, to No. 6 and host Morgan (16-6). In looking back, the Kangaroos left their mark in turning some heads during the process.

Dao, the son of Denelson Dao of Terryville, a point-guard, made the go-ahead shot in the opener and notched 10 points and five assists in the second. Fowler talks about his ‚ÄúAOW‚Äù player. ¬Ý¬Ý

‚ÄúDominick developed throughout the season and showed he has the potential to be a star,‚Äù Fowler said. ‚ÄúHe has great basketball skills, including the ability to score in different ways. But the thing that makes Dominick special is his ability to make everyone around him better. That is the true sign of a star and Dominick‚Äôs potential is through the roof because of that combination. He was been a big part of our success down the stretch of the season and helped us sneak into the tournament.‚Äù

Dao talks about the tournament games, first with regards to Bullard Havens.

‚ÄúI think we moved the ball very well and played good defense,‚Äù Dao said. ‚ÄúWe knocked down some tough shots at the end of the game and kept our composure. When we play together as a team it helps us get everything going on our offense and defense.

He added that things will be even better next winter, because three of the starters return and that doesn‚Äôt include himself.

‚ÄúI think we have a very bright future considering that everyone doubted us and we went pretty far while playing two away playoff games,‚Äù Dao said.

What makes it all the better for Dao is the fact that his two brothers also play for the Kangaroos. Devonne is a junior starter and Devin, a sophomore, also comes off the bench.

‚ÄúIt feels good,‚Äù Dao said. ‚ÄúThere‚Äôs a connection. We grew up playing together and we know how each other plays. It‚Äôs fun.‚Äù