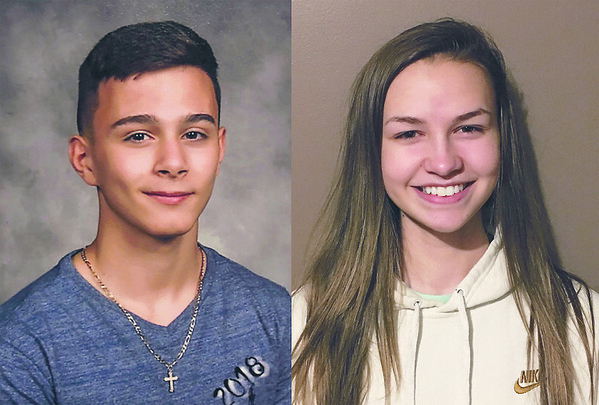 The winter sports season has been good for this weekâ€™s two sophomore Athlete of the Week honorees from Bristol Eastern, because their teams have experienced success and they have been an integral part of that success.

Scarritt, the daughter of David and Tracy Scarritt, is a forward for the Lancers, who took a 15-7 record as the No. 9 seed in Class L heading into last nightâ€™s game at No. 1 Â New Haven-Fairfield.

â€śSage has seen a big improvement with Meredith (Forman) getting hurt last year,â€ť Floyd said. â€śShe came in green and stepped up. She worked on her game this year, developed a jump shot and plays good defense in the post area of the game. Iâ€™m very pleased with her progress from last year.â€ť

Floydâ€™s Lancers lost their first three games of the season and four of their first six.

But a five-game winning streak prior to the end of the regular season helped them to become a team which fears no other. When everything is working, as it has been of late, they can be dangerous.

â€śI think our composure as a team is good,â€ť Scarritt said. â€śAnd we all fought our way to work together. Weâ€™ve all been talking recently and our main goal is to go to Mohegan with the [state] finals. I think thatâ€™s the only thing pushing us to keep going.â€ť

Scarritt began the sport with Upward Basketball through Hillside Community Church and out of South Side School when she was eight years old.

â€śI started playing because my aunt, Sarah [Scarritt] Remigio, was a state champion when she was here,â€ť Scarritt said. â€śSo, she was an influence.â€ť

In addition to basketball, Scarritt also plays volleyball for Lancer coach Stacy Rivoira. She and her teammates reached the semifinals of the state tournament this past fall and are hoping to go all of the way her junior season.

She loves both sports, but itâ€™s basketball thatâ€™s her favorite.

â€śI like the competition and the feeling of going up and down the court,â€ť Scarritt said. â€śI love pressing against the other team. I like defense. I usually have the other teamâ€™s biggest players and forwards. I love playing with my team, everyone cheering from the bench and how into the game everyone is.â€ť

Nichols, the son of Lara and Tom Nichols, is the 132-pound Class L wrestling champion who finished third at the State Open. He traveled to the New Englands this past weekend with Lishness, who is pleased to have him for another two seasons.

â€śTommy has been wrestling for a very long time, having started with the Gladiators when he was very young,â€ť Lishness said. â€śHe just took to the sport right away. I think the combative nature of wrestling just works for him. What makes Tommy special is his willingness to mix it up. Some athletes shy away from a fight, while others seem to raise their level in tough situations. Tommy is one of those athletes. He is very mentally tough.â€ť

Nichols talks about the State Open, where he was seeded No. 3 going in and only lost in the first of multiple matches.

â€śI had an upset match the first time going in,â€ť Nichols said. â€śI shouldnâ€™t have lost, but I knew I had to battle back for third. I wish I could have done better, but Iâ€™m proud of my finish.â€ť

The previous week at the Class L event he won it all after being the No. 1 seed.

â€śI was expecting to win, because all of my hard work paid off,â€ť Nichols said. â€śI thought that being seeded No. 1 you kind of have to follow through it. When I won, I was excited. It was a whole mix of emotions.â€ť

Going into New Englands, Nichols had hoped he would do well, but wasnâ€™t overly satisfied with his results and that disappointment, Lishness added, â€świll just fuel himâ€ť for the future. The sophomore went 1-2 competing in a tough weight class.

Lishness accompanied Nichols to the competition.

â€śHeâ€™s been with me since the start,â€ť Nichols said. â€śHeâ€™s really one of the people who made me what I am today. Iâ€™m happy that all of my coaches have pushed me to be the best I can be.â€ť

Thereâ€™s also the fact that Nichols and his teammates help one another.

â€śWe always work hard together and push each other through the ups and downs,â€ť Nichols said. â€śAnd no matter what, we stick together like family.â€ť