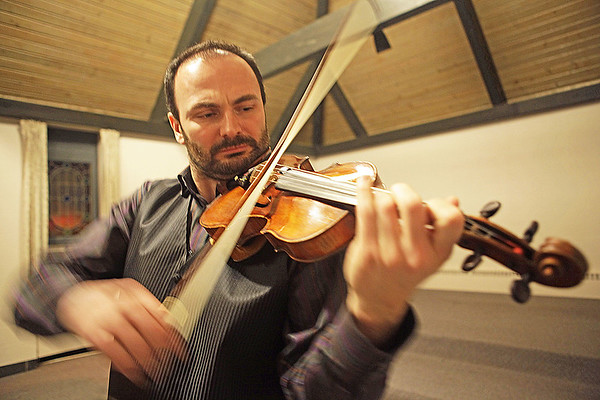 This yearâ€™s concert will highlight the music of Henryk Wieniaswski, 19th Century Polish composer and violinist, with performances by the Moniusko Choir and violin soloist Adrian Sylveen. Admission is free.

The concert is presented in collaboration with the Polish Studies program at CCSU.

Wieniaswski was born in Lublin in 1835. His talent for playing the violin was recognized early, and in 1843 he was accepted by the Paris Conservatoire, where special exceptions were made to admit him, as he wasnâ€™t French and was only nine years old.

After graduation, he toured extensively and gave many recitals, where he was often accompanied by his brother JĂłzef on piano. In 1847, he published his first opus, a Grand Caprice Fantastique, the start of a catalogue of 24 opus numbers.

At the invitation of Russian composer Anton Rubinstein, Wieniawski moved to St. Petersburg, where he lived from 1860 to 1872, taught many violin students, and led the Russian Musical Societyâ€™s orchestra and string quartet. From 1872 to 1874, he toured the United States with Rubinstein. Wieniawski became violin professor at the Conservatoire Royal de Bruxelles in 1875.

During his residence in Brussels, Wieniawskiâ€™s health declined, and he often had to stop in the middle of his concerts. He started a tour of Russia in 1879 but was unable to complete it, and was taken to a hospital in Odessa after a concert. His friends arranged a benefit concert to help provide for his family. He died in Moscow a few weeks later from a heart attack and was interred in the PowÄ…zki Cemetery in Warsaw.

Wieniawski was given a number of posthumous honors. His portrait appeared on a postage stamp of Poland in 1952 and again in 1957. A 100 zĹ‚oty coin was issued in 1979 bearing his image.

The first violin competition named after Wieniawski took place in Warsaw in 1935, 100 years after his birth. The International Henryk Wieniawski Violin Competition for young violinists has been held every five years since 1952 in PoznaĹ„, Poland.

Established in 1997, the Connecticut Virtuosi Chamber Orchestra is dedicated to presenting both traditional and contemporary works to the public. It consists of approximately 27 professional musicians representing many nationalities.

Its mission has been to preserve and perpetuate the great traditions of chamber orchestral music through public performance, educational programs, and showcasing regional and international talent. In the choice of repertoire, special attention is given to music from Eastern Europe.

He has participated in several international festivals; received the American Council for Polish Culture Award, â€śfor his eminent performances as conductor and violinist in U.S and Europe;â€ť the â€śPrimus Inter Paresâ€ť Award given by the president of the Republic of Poland; among others.

Sylveen holds master of music and artist diploma degrees from the Yale University School of Music and he is also a graduate of the Paderewski Music Academy in Poznan, Poland. Since 2012, he has been on the faculty of the Virtuosi Summer Music Institute at Tunxis Community College and since 2015 has been an artistic director of the Greve Opera Academy and Chamber Music Festival in Greve-In-Chianti, Italy.