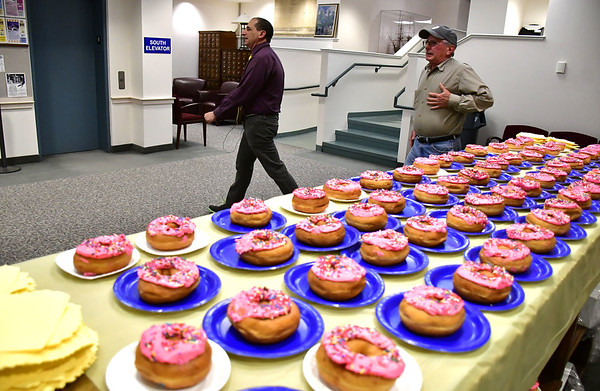 5/23/2019 Mike Orazzi | Staff Mike Reiss, creator on the Simpsons, who was born in Bristol, CT, walks past donuts before his talk at the Bristol Public Library Thursday night. Buy this photo

5/23/2019 Mike Orazzi | Staff Mike Reiss, creator on the Simpsons, who was born in Bristol, CT, during his talk at the Bristol Public Library Thursday night. Buy this photo

BRISTOL - An Emmy- winning writer for āThe Simpsons,ā Mike Reiss, stopped by the Bristol Public Library Thursday night to talk with over 200 guests about his experiences scripting the show,and about his new book, āSpringfield Confidential: Jokes, Secrets, and Outright Lies from a Lifetime Writing for The Simpsons.ā

āI wasnāt going to miss this for the world,ā city native Reiss said, āNot too many people say this, but I am thrilled to be in Bristol on a Thursday night at the library.ā

In his youth, Reiss said, he spent a lot of time at the city library, reading a variety of books that helped advance his interest in writing.

āFor example,ā he said, āIn the very first episode of āThe Simpsons,ā when Homer is playing Scrabble and throws it into the fire, I actually had that happen in my youth, from one of my childhood friendās father.ā

In another episode, Lisa has a crush on her substitute teacher with a slight deformity.

āWe used a real-life example of a substitute teacher I had in school who had a deformity. The animators decided to make the teacher look like me and the teacher was voiced by Dustin Hoffman,ā laughed Reiss.

Reiss explained that there are 23 writers working on the show and each season contains 22 episodes. He said it can take anywhere from nine months to a year to create one episode.

āWeāre a very topical show,ā he said. āWe take ideas from TV, from movies and our personal lives. A lot of people ask how we have āpredicted the future,ā especially the episode back in 2000 in which Donald Trump becomes president.

āIām going to tell you and I canāt make this up. One day were sitting in the office trying to come up with content and weāre thinking āWhatās the stupidest thing we as Americans can imagine doing?ā Someone, I canāt remember who, said, āTrump as president.ā And everyone just laughed.

On creating content for āThe Simpsons Movie,ā which came out in 2007, Reiss said the script took four years to write.

āThere was 165 drafts, nine writers and 11 directors. And while thereās no plans right now for another movie, I would like to see one. Maybe in CG or live-action. If they make it live-action I could see Vin Diesel as Homer and William H. Macy as Ned Flanders,ā he joked.

His favorite characters to write for are Homer and Grandpa Simpson.

After the program, guests had the opportunity to meet with Reiss, shake his hand, ask for autographs and, in some cases, reconnect.

āIt was unbelievable, I couldnāt have been more pleased. I do a lot of public speaking and I was glad the audience was able to laugh at some of the more daring jokes. It was wonderful seeing people from every aspect of my life. I saw former teachers, neighbors and old friends. There were people I havenāt seen in almost 40 years. It was just a wonderful time,ā Reiss said.

Lindsay Vigue, chairwoman of the Bristol Arts and Culture Commission, was thrilled that Reiss was available and willing to do a presentation at the public library.

āHe was nothing but kind, warm, gracious and accommodating. He is very vibrant and creative and breaks boundaries with diversity. It was a wonderful time and we were thrilled with the turnout and the amount of laughter from the audience. We know Bristol is very sports-centric, but we thought this program would be good for the community to support the value of the arts,ā Vigue said.